If you took any history 101 class, you may have heard of civil rights activist, and overall great guy, Martin Luther King, Jr.. And if you happened to be awake during your teacher’s lesson, you may have retained some of the brilliant and moving words Dr. King spoke, particularly his speech that included living “in a nation” that judges a person by the “content of their character”. And though these words were taken from a speech promoting civil rights and condemning racial segregation, being judged by the content of one’s character is apparently an ideal the internet has no coding for.

A friend of mine, like myself, and many people I know, finished a well earned degree and decided to travel abroad. She chose to teach English on the colorful shores and at times eccentric country of South Korea. New sights, sounds, smells and tastes were and continue to be exciting, scary and sometimes humorous all of which she has shared through, you guessed it, social media. Little did she know that sharing beyond her circle would mean opening herself up to an onslaught of superficial, misogynistic and downright cruel commentary. 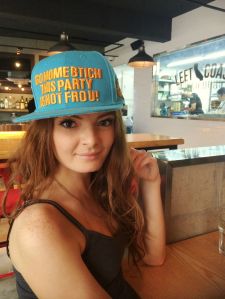 An innocent post on reddit, sharing the comedic value of translated English grammar, sent many users on a tirade, one such user suggesting that she take a picture “of the fucking hat not yourself you attention whore”. While others criticized her appearance, including a paragraph detailing what was physically ‘wrong’ with her. Though some users found the humor in the original post, and a few others came to her defense, many of the comments focused mainly on her physicality in negative and even derogative ways. But wasn’t the post about a hat?

The internet has a life of its own. I am not so ignorant to not see or accept, that as an entity, it cannot be policed in the same way a physical life is. But is it too much to ask that the few civilities that remain in our analogue world, also exist in a digital one? I have judged many a person’s looks – made a snide comment about a stranger to a friend, or expressed a dislike for a celebrity based purely of their appearance. We all have. The difference is, I have never done so within earshot, or in this case, text-shot, of the subject I’ve criticized. I couldn’t imagine walking up to a stranger just to question if they’ve had “botched cosmetic surgery” or if they’re “ an alien with a human skin mask”.

Anonymity online has its benefits; it allows groups and individuals to express their feelings, opinions, and even hardships, without fear of retribution. However that same anonymity can also be severely detrimental. As one reddit commentator said “I’m using the anonymity of the internet to do whatever I want. Why bother lying and saying she looks good when I can be straight up and tell her she has a messed up face”. Well, I can tell you why @Slappin_hoes, because it’s cruel for no other reason than being cruel.

I’m not an optimistic idealist, there will always be a level of nastiness in any arena, but the abundance of superficial malice online is unnecessary, and really, just pathetic. An uninvited sadist gets his/her pleasure from the pain and suffering of his/her victim, and we as a society condemn them for it. But verbal savagery continues to breed in forums and threads without consequence. And I wonder, has the freedom of anonymity become a cancer preventing us from being our online selves, or has it illuminated who we really are – detached and callous predators.